Can you change the shape of a muscle? This has been a topic of heated debate across social media lately. On one hand you have the group who says it’s broscience to think you can change the shape of a muscle. They believe that your muscles grow uniformly. That the shape always stays the same and it just grows bigger. I’ve seen guys standing next to their dad flexing their guns, and because their arms are similar in shape they state, “See, the shape of your arms is solely predetermined by genetics.” Now if that’s not broscience I don’t know what is.

Interesting enough, it’s the evidence based group who believes it’s possible to change the shape of your muscle. Among those leading the charge are Jose Antonio, Brad Schoenfeld, and Bret Contreras. I’m forever grateful for their continuous efforts toward merging in-the-trenches experiences with cutting edge physique training research.

In the following video presentation and accompanying article I will reveal the scientific research and photo proof to support the argument that you can indeed change the shape of a muscle.

Genetics: What You Can’t Change

Genetics certainly play a huge role in the shape of your muscles. There are definitely certain factors that you can’t change. For example, my workout partner Rick has a deep vertical split running along his biceps, separating the long head and short head. I have a horizontal split running across my biceps. 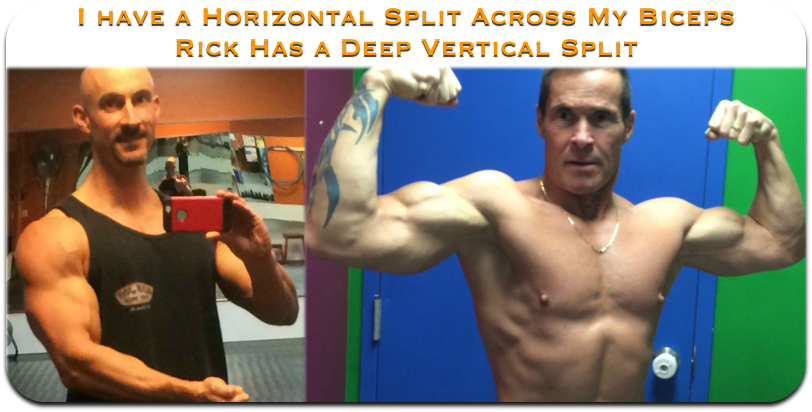 Another genetic factor you can’t change is the origin and insertion of a muscle. Make note of the gap between Rick’s biceps and his elbow. It’s much larger than the gap I have. The reason is that my biceps inserts lower on my radius (forearm). Therefore I have a longer biceps muscle belly than Rick, which changes the visual impact and aesthetic appearance of my upper arm. 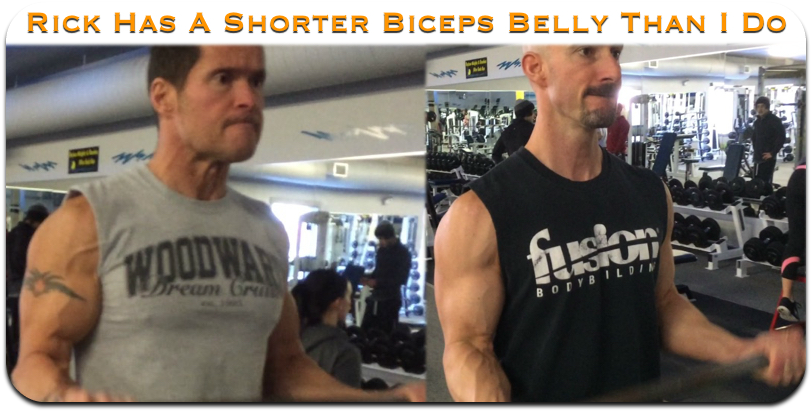 How Can You Change The Shape Of A Muscle

I know guys in the gym who focus solely on barbell curls for training their biceps and they always use a wide grip. It shows in their physique. The short head of their biceps is much larger and out of proportion than their long head. The outer aspect of their upper arm is lagging behind.

If they were to include more Hammer Curls and Incline Dumbbell Biceps Curls, they could “Bring Up” the outer aspect of their upper arm. Hence, they would change the shape of their muscle.

But changing the shape of your muscles goes beyond targeting individual heads of a muscle to create a balanced, symmetrical, and proportionate physique. In an incredibly insightful paper by Jose Antonio, titled Nonuniform Response of Skeletal Muscle to Heavy Resistance Training: Can Bodybuilders Induce Regional Muscle Hypertrophy? he reveals multiple factors that could contribute to nonuniform growth of a muscle, including compartmentalization of skeletal muscle, muscle fiber types, neural adaptations, metabolism, and hormonal responses.

Let’s first take a look at the intramuscular fiber type differences. In the paper Jose states,

Note: The insertion point of the biceps is the portion close to your elbow. The origin is close to the shoulder.

“On the basis of the preponderance of evidence that shows that heavy resistance training induces a preferential hypertrophy of type II or fast fibers, it would be plausible that a normal response of skeletal muscle would be to enlarge in a nonuniform manner. That is, those regions of a muscle that are predominantly fast-twitch would enlarge proportionately more than those that are slow-twitch. Thus, is it possible to emphasize particular kinds of exercise or training protocols (e.g., high vs. low volume) that could selectively hypertrophy parts of a muscle and in essence change the shape of that particular muscle?”

This definitely provides us with some food for thought. If your training is designed for hypertrophy of type II muscle fibers by focusing on the lower to moderate rep ranges, will it result in greater growth of the short head of the biceps and even more so in the lower region of the biceps?

The portion of the paper that really intrigued me was about the compartmentalization of skeletal muscle.

“An individual muscle is more than just a collection of muscle fibers spanning the entire muscle belly with a single muscle–nerve interaction. Instead, a muscle can be divided into neuromuscular compartments, which are distinct regions of a muscle, each of which is innervated by an individual nerve branch and therefore contains motor unit territories with a unique set of characteristics. In other words, different portions of a muscle may be called into play depending on the task demands of the situation.”

During the past three years I’ve noticed that the upper region of my biceps (the portion just above my horizontal split) has been growing at a faster rate than the lower region. Based on the evidence presented by Dr. Antonio on the muscle fiber distribution and compartmentalization of muscle fibers, combined with the fact that I’ve been including a great deal more higher repetition exercises for my biceps, it makes sense that the upper aspect would be growing faster.

Interesting enough, this has indeed altered the peak of my biceps, which is in stark contrast to what some fitness coaches claim. 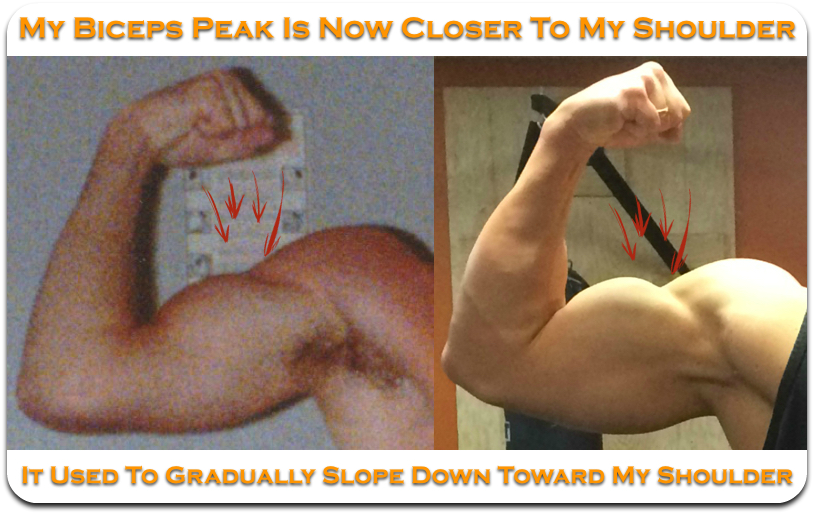 Based on the evidence at hand, Dr. Antonio concludes,

“It would make sense that the response of skeletal muscle to resistance training would be a nonuniform hypertrophy. In fact, the idea that a muscle would respond in a uniform fashion would seem implausible in light of the fact that there are distinct physiological/anatomical differences within a single muscle.

The existing studies (both acute and chronic train- ing) show that within a given muscle, there is not a homogeneous response with regard to electrical activ- ity (as measured by EMG), changes in muscle area, muscle fiber area, or even fiber number.” 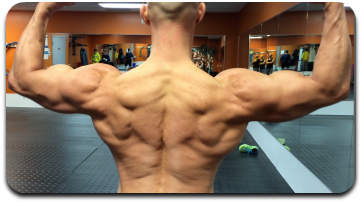 Of course, this applies to more than just the biceps muscle. The trapezius muscle has an upper region (neck area) attaching at the base of your scull, a middle region that spans from shoulder to shoulder, and a lower region that comes down to a point in your mid back.

Exercise selection certainly has a visual impact on the aesthetic appearance of your muscles. Physique Athletes pride themselves on sculpting round shoulder caps. They do so by including exercises that target the front, lateral, and rear aspects of the deltoid muscle. You can’t tell me that performing only lateral raises will allow you to evenly develop all aspects of your shoulders. Often times a Physique Athlete will notice that the rear aspect of their shoulders is lagging behind. Therefore, they include more exercises that target that specific region of the deltoid, hence changing the shape of the muscle.

Recently Brad Schoenfeld conducted a study that looked at the activation of the lower and upper aspects of the hamstring muscle while performing the Leg Curl compared to the Stiff Leg Deadlift. The paper is titled, Regional Differences In Muscle Activation During Hamstrings Exercise. Brad delves into the specifics of the study in his blog post, Can You Target Different Aspects Of The Hamstring?

The study revealed that,

Based on this evidence, if the lower aspect of your hamstrings are lagging behind, it may be wise for you to include more Leg Curls in your training program.

This area of research is still in it’s infancy and further study is certainly required to provide more clarity on the topic. My hope is that we see more studies focused on the mind-muscle connection with advanced lifters and how we can steer our neural drive to target specific regions of a muscle.

This is why I love the sport of Natural Bodybuilding. It’s both a science and an art. We’re more than just a bunch of muscle heads who lift things up and put them down. We’re intelligent, curious, and fascinated. This curiosity is leading to research that backs up many of the claims that us bros have been making for decades. It’s also lead to some ground breaking research that is opening our eyes to new possibilities for taking our training and physique to the next level.

Bottom line, I’m stoked for the future of Natural Bodybuilding thanks to the work of my fellow bros such as Brad Schoenfeld who have been in the trenches and carry their experiences from the gym into the lab.

Alright, now that I’ve spoken my mind… come at me bro 😉 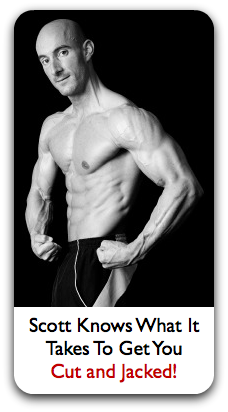 Scott Tousignant, BHK is a Physique Coach and Elite Natural Bodybuilder with the UFE.

Scott specializes in helping regular men and women sculpt their body into a chiseled work of art.

Viewing training as an art form and your body as a sculpture is a simple shift in mindset that brings out the beauty in your ongoing body transformation.

The art of molding and chiseling an aesthetically pleasing physique with spectacular symmetry, proportions, and carved out detail is one of life’s most rewarding and fulfilling experiences…

…It’s an opportunity for self growth and self discovery that will impact every area of your life.

More Places For Us To Connect…