If you’re a bro over the age of 40 who fears his days of slabbing on rock solid aesthetic muscle are behind him, you’re in for an eye opening treat with this guest post from my brother in iron Paul Thiel.

Paul’s physical transformation this past year has absolutely blown my mind. Even more impressive is his consistency and dedication to the craft of physique artistry.

Upon seeing the stats from his nearly year long muscle building journey and hearing the valuable insights from his experience, I knew it was gold that just had to be shared with you.

So without further ado, let’s dive into those knowledge bombs!

In 46 weeks, I managed to add 39 lbs of body weight, with over 21 lbs of that coming as muscle. And topping the scale at 209 lbs was a huge achievement for me. But what did I learn from almost a year of bulking?

There’s nothing exceptional about my genetics. I’m an average 5’9” and my natural set-point is a soft welterweight. I’ve played sports casually over the years and spent my entire working-life sitting behind a desk. But I’m certainly no bodybuilding noob, and I definitely know my way around the gym with many years of training under my belt. I’m also in pretty good shape considering my forty-six years. In the realm of physique transformation, I’ve been as low as 148 lbs and single digit body fat, and previously topped the scale at 187 lbs.

Like most bodybuilder and physique transformation types, I’ve taken what you’d call a traditional approach to bulking and cutting cycles.

And it mostly worked. Over a number of eight and twelve week cycles, lean body mass was consistently added a few pounds at a time. But on some level, in spite of the steady progress, the results just weren’t satisfying.

Besides, I can be a greedy son of a bitch at times. And I wanted real size. All of it.

So coming off the back of a hernia repair in August last year, I started out on what became known among my friends as “The Epic Bulk”.

Lesson #1: You have to learn how to eat

In the early stages of the bulk, moving the scale was hard. I was eating, feeling full and training hard. But beyond the first few pounds, the scale wouldn’t budge.

Let’s be clear, the term “bulking” is a much maligned and often abused, with many seeing it as a green light to rent a room above Golden Corral and pop fried chicken like Tic-Tacs.

But that’s not for me.

And not from some supercilious, moral high-ground, but because my life literally depends on it. As we’ll get into later, I have trouble with cholesterol, and fatty foods are completely off the table.

Eating more was hard. Particularly in a busy work environment where it was not practical to have eating dictate your daily schedule.

To tackle this problem, I had to approach eating like my training. That meant pushing either frequency or volume. And as everyone knows, volume must be increased slowly and over time.

Step one was to increase my meal frequency, adding in snacks around my three square.

Step two was to slowly increase the size of those meals and snacks.

And it worked. By the end of the bulk, I was able to eat considerably more than I was at the start.

But still, it wasn’t as much fun as I thought it would be. Sure, freedom had its upsides, and it was certainly nice to not count calories or worry over treats and meal sizes. But I was also perpetually full to the point where the next meal was a source of angst, not enjoyment.

As the bulk took hold and I added more size, so the questions began.

It was always interesting to see the disappointment on people’s faces when I gave them my answers.

They clearly wanted to hear something unique. Some special protocol or program that they hadn’t yet discovered, or the latest and greatest supplement that was finally able to “unlock my true genetic potential”.

Through this entire period, not a single protein shake was chugged.
Not a single fuck given for the post-workout anabolic window.

Training ebbed and flowed in response to life, work pressures and my own mental highs and lows. Sometimes it was highly structured. Other times, completely ad-hoc.

That’s not to say I didn’t train hard. I certainly trained hard. And I mostly trained smart.

The point I am making for you is that there was no secret sauce. No magic. No short-cut or silver bullet. It was plain, un-sexy consistency that netted me the results.

Lesson #3: Bulking is tough on the psyche

I’ve experienced every kind of emotion on this Epic Bulk.

Everything from He-Man and mastery of the entire fucking universe to feeling all “Fat Bastard” and mixed emotions at the state of my body.

Certainly, there was something incredibly empowering walking around at 210 lbs. I felt HUGE. Objects moved toward me against their will. I had literally created my own gravitational pull!

Well, not quite, but you get the idea.

And yet, putting on socks had literally become my sub for cardio.

Clothes slowly stopped fitting, and for the last four months, I’ve been wearing a single pair of jeans and recycling the same seven t-shirts during the week.

Discomfort was with me every day, and it felt like the entirety of those last pounds were going straight to the waist.

Now, throughout my many hypertrophy and bulking phases, I’ve always managed to stay the right side of 50% of my gains coming from lean body mass.

But as I came into this last test, I found myself praying for bad numbers. Wishing the numbers to be on the wrong side of 50%.

A sign from the bulking Gods that I’d done enough; paid my dues.

That I had served!

I was both pleased and disappointed in the same breath. Such a strange mix of emotions.

On the one hand, I was stoked that I’d maintained momentum on this bulk, taking my body into the uncharted territory of a light heavyweight, and on the other mentally unprepared to push it any further.

After some reflection and a solid review of the numbers, I managed to find a different perspective.

Lesson #4: Every line is the perfect length if you don’t measure it

Sure, that might seem extreme to some, but it’s really not.

Knowledge is power, and the additional data is evaluated and balanced with how I am looking in the mirror, and how I am feeling day to day.

“Information isn’t what’s scarce; it’s the willingness to do something with it.” — Tyler Cowen

I can’t tell you how invaluable the body fat testing has been throughout this bulk. To have concrete numbers as to how the bulk was progressing kept me sane. Especially during the times when I felt less than confident that things were going my way.

Let’s look at a few numbers from this final test:

In the end, it was the data that helped in my decision to draw this bulk to a close. Data in the form of ceilings; numbers I wouldn’t be prepared to go above.

For me, that means acknowledging 30 lbs of fat or 15% body fat as a strong signal to change tack and switch to maintenance or leaning out.

And I’d comfortably exceeded those ceilings.

Combined with how I was feeling, the extreme discomfort of those final pounds, it was time. Time to revel briefly in the results and start the cut.

On the back of the compelling numbers from the Epic Bulk? The shittiest set of lipids you could ever wish for.

And I knew it was coming. I was prepared.

And yet, when you see them in writing–that page of red and yellow boxes–it’s thoroughly unsettling. In fact, it’s downright scary.

I have bad genes. Not as bad as they could be, and certainly not all zee genes. But one gene in particular causes me some problems, and that’s the APOE gene.

The APOE gene provides instructions for making a protein called apolipoprotein E. This protein combines with fats (lipids) in the body to form molecules called lipoproteins. Lipoproteins are responsible for packaging cholesterol and other fats and carrying them through the bloodstream. The E4 variant makes a protein characterized by faster cholesterol metabolism resulting in a higher blood cholesterol level. As a result, a low-fat, higher carb diet is recommended for carriers of the E4 allele.

If my glass were half full, I’d be grateful that I am only carrying one of E4 allele. So thanks, mum or dad, for giving me at least one E3 allele. Much appreciated.

But what does all this mean?

It means, that even when I am paying 100% attention to everything that passes my lips, abstaining from alcohol and otherwise eating like a saint, my lipids still ain’t no thing of beauty.

Hence a laser-like focus on bulking (epic-ly), combined with more than a few mental hiccups this last six months, and you end-up here. With LDL over 150, HDL through the floor and enough of the small, dense lipoprotein particles to block your sink, let alone an artery.

The reality is that I’ve not spared nearly enough cycles for caring about food quality at the level needed to sustain good lipid numbers.

I need an ultra-low fat diet, and I just haven’t been watching closely enough.

And to be clear, as I said earlier, it’s not like I was chucking back pizza and chicken wings every day. My food quality is good as compared the average Joe.

But fat intake has not been tracked, and lots of dining-out has exasperated the issue. For me, even the healthier fats need to be monitored, and it’s not like I was exactly counting-out the almonds. It was more like “half a bag, that should do!”

And here we are.

At the time of writing (early October), I’m about a month or so into a gentle cut.

No calorie counting, no macros. Essentially just hunger management in these early phases. Measuring will come later, if and when greater fidelity is needed to make progress.

For training, the plan was supposed to be steady as she goes. But coming off the news of the shitty lipids, I am making a larger that planned course correction.

So training has shifted gears a little, leaning toward super-sets, shorter rest intervals and workout finishers. I’ve also started to add met-con days into the mix including circuits and barbell/kettlebell complexes, as well as a little steady state.

I’ve also bumped TDEE by making time daily to get outside and walk around the office while I collect my thoughts. The desk is in standing mode only.

All these things will help.

So far, I’m down to 201, just 8 lbs from my peak, but what a difference it’s made. Despite the chub still snarling around my midriff, I already feel a lot tighter.

And socks? Well it’s only like wrestling one of those baby gators now…

Priceless insights from my brother in iron Paul Thiel.

I’d love to hear what struck a cord with you the most. Personally I really appreciate lesson #4. It’s the main reason this article came to fruition. I was beyond impressed with Paul’s tracking skills and even more impressed with the consistency of his improvements.

It’s been a couple months since Paul first submitted this incredible article to me and I’m happy to report that his cutting phase has been going exceptionally well. Here’s a recent chart of his progress. 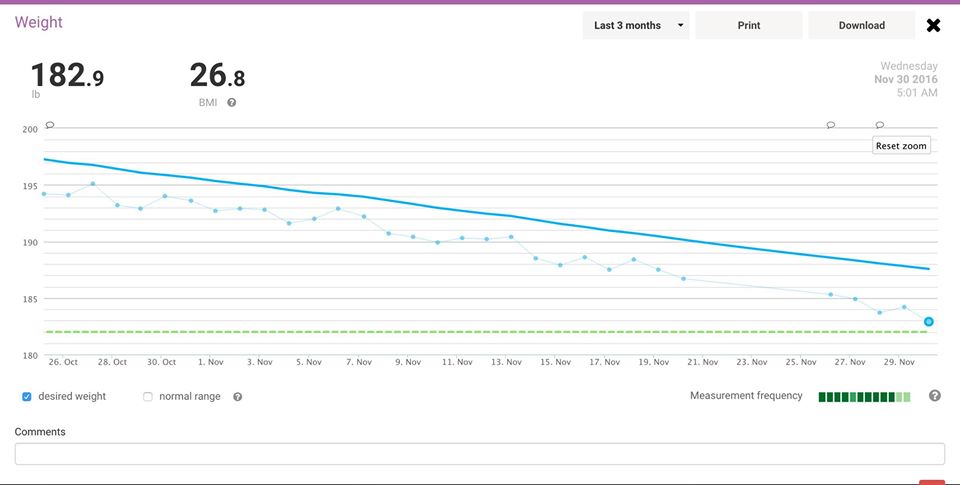 We call Paul the master of straight lines, because his progress is so consistent. Whether he’s building muscle or burning fat his progress is linear, which is beyond impressive.

Now if you’ve enjoyed this article I highly recommend you head over to Paul’s website Visceral Shift. It’s a gem!